Rescue workers carry the body of a victim of a Ukrainian plane crash in Shahedshahr, southwest of the capital Tehran, Iran, Wednesday, Jan. 8, 2020. (AP Photo/Ebrahim Noroozi)

TORONTO — Sixty-three Canadians were among the 176 people killed when a Ukrainian passenger plane crashed near Iran’s capital only minutes after takeoff.

The Ukraine International Airlines jet, Flight PS752, hurtled into farmland outside of Tehran only minutes after taking off from the capital’s main international airport on Wednesday morning.

All 176 passengers and nine crew members on board the Boeing 737-800 aircraft were killed.

Ukrainian Foreign Affairs Minister Vadym Prystaiko said there were 63 Canadians, 82 Iranians, and 11 Ukrainians on board. There were also 10 Swedish, four Afghan, three German, and three British nationals killed in the crash.

The airline released a list of the passengers on board the plane which includes birth dates, but not nationalities. The youngest person on the flight was born in 2016, while the oldest was born in 1950.

In a statement released Wednesday, Prime Minister Justin Trudeau said he was “shocked and saddened” to learn of the plane crash in Iran.

“Sophie and I offer our deepest condolences to those who have lost family, friends, and loved ones in this tragedy. Our government will continue to work closely with its international partners to ensure that this crash is thoroughly investigated, and that Canadians’ questions are answered. Today, I assure all Canadians that their safety and security is our top priority,” he said.

Global Affairs Canada has not responded to a request for comment from CTV News.

“Tragic news regarding Ukraine International Airlines Flight 752. Our hearts are with the loved ones of the victims, including many Canadians,” he said.

Champagne added that he has been in touch with the Ukrainian government.

Transport Minister Marc Garneau said on Twitter his office was in touch with their international counterparts and that Canada is offering “technical assistance” to the investigation.

Ukrainian President Volodymyr Zelenskiy also extended his condolences to the victims’ families. His office said he was cutting short a visit to Oman to return to Kyiv. Ukrainian officials have offered to assist with the investigation and announced they’re preparing to send a group of specialists to help determine the cause of the crash.

Andriy Shevchenko, Ukraine’s ambassador to Canada, tweeted that his “heart is broken” and they “will have to go through this terrible pain together with our Canadian brothers and sisters.”

Most of the passengers were en route to the Ukrainian capital, Kyiv, before making their way to other destinations, airline officials said. Staff at Boryspil airport in Kyiv told The Associated Press that Iranian students coming home after winter holidays usually make up the passengers on that flight.

Iranian officials said they suspected a mechanical issue was to blame for the plane crash. Ukrainian authorities initially agreed, but later backed away from that assessment, citing the ongoing investigation.

There is no indication at this stage whether the plane crash is connected to the missile attack earlier that day. 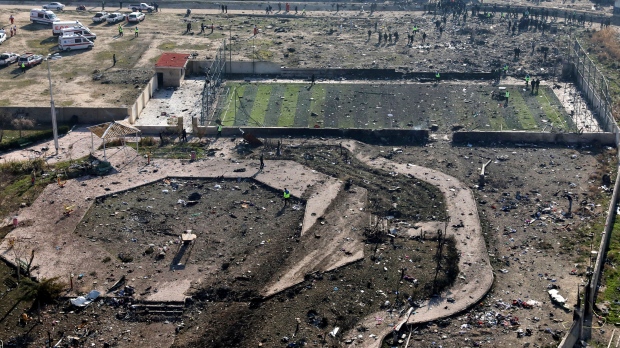 In light of the escalating tensions between the U.S. and Iran, Global Affairs Canada warned against any “non-essential” travel to Iran due to the “volatile security situation, the regional threat of terrorism and the risk of arbitrary detention.” The agency said those who hold dual Canadian-Iranian citizenship were particularly at risk for being arbitrarily questioned, arrested and detained.

“Iran does not recognize dual nationality and Canada will not be granted consular access to dual Canadian-Iranian citizens,” the statement said. “Canadian-Iranian dual citizens should carefully consider the risks of travelling to Iran.”

Following the plane crash in Iran, Canada’s only air carrier in the region, Air Canada, rerouted its flights to “ensure the security of its flights into and over the Middle East.”

Flight PS752 had been delayed from taking off from Imam Khomeini International Airport by nearly an hour and never made it above 2,400 metres in the air, according to data from the flight-tracking website FlightRadar24. 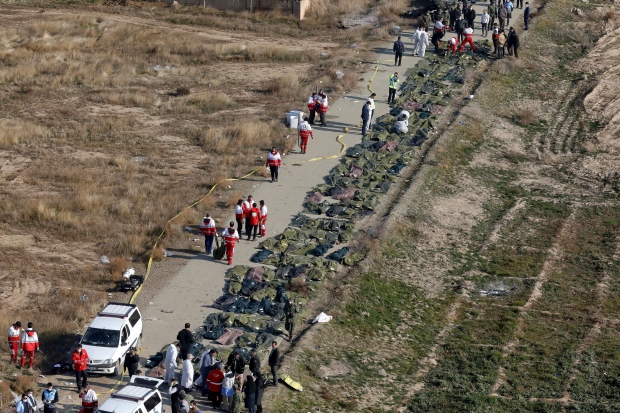 Bodies of the victims of a Ukrainian plane crash are collected by rescue team at the scene of the crash in Shahedshahr, southwest of the capital Tehran, Iran, Wednesday, Jan. 8, 2020. (AP Photo/Ebrahim Noroozi)

While it’s still unclear what caused the crash, Qassem Biniaz, a spokesman for Iran’s Road and Transportation Ministry, was quoted in the state-run IRNA news agency as saying a fire struck one of the aircraft’s engines and the pilot then lost control of the plane.

Ukraine International Airlines announced that it has suspended flights indefinitely to Tehran.

Hassan Razaeifar, the head of Iran’s air crash investigation committee, said it appeared the pilot was unable to communicate with air-traffic controllers in Tehran moments before the crash.

Boeing released a brief statement about the crash involving one of its aircraft.

“This is a tragic event and our heartfelt thoughts are with the crew, passengers, and their families. We are in contact with our airline customer and stand by them in this difficult time. We are ready to assist in any way needed.”

While Iranian authorities said the plane’s black boxes, which record cockpit conversations and instrument data, had been found, the semi-official Mehr news agency quoted the head of Iran’s civil aviation organization as saying the black boxes would not be sent to Boeing for investigation. Like other airline manufacturers, Boeing typically assists with investigations involving their aircraft.

The Boeing 737-800 jet, which is commonly used for short to medium-range flights, crashed into farmland outside of Tehran, littering the ground with flaming debris.

Din Mohammad Qassemi, a resident who lives nearby, told The Associated Press he was watching the news about Iran’s ballistic missile strike when he heard the crash.

“I heard a massive explosion and all the houses started to shake. There was fire everywhere,” he said. “At first I thought (the Americans) have hit here with missiles and went in the basement as a shelter. After a while, I went out and saw a plane has crashed over there. Body parts were lying around everywhere.”

Journalists from the Associated Press reported seeing passengers’ possessions scattered across a field, including a child’s cartoon-covered toothbrush, a stuffed animal, and electronics.